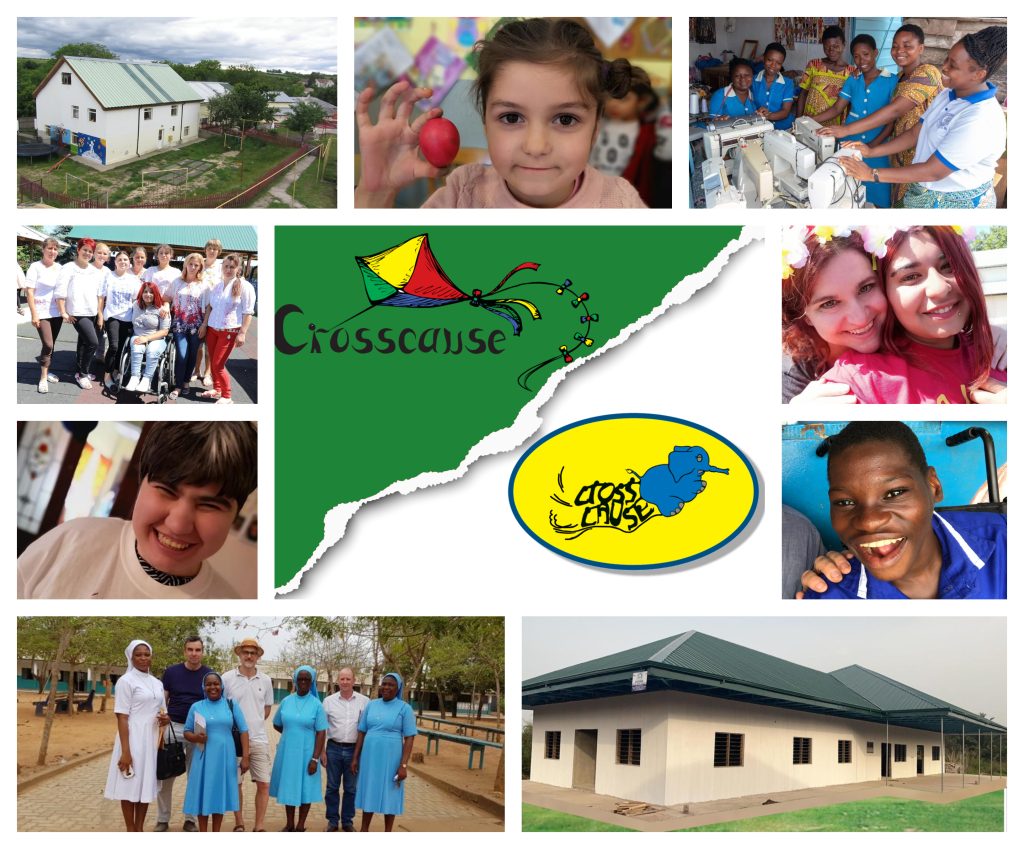 Founded in 2003, Crosscause is an Irish registered charity, set up by dedicated volunteers working with special needs orphans in Romania. Due to our success in the past, we have now been able to expand into Eastern Europe and West Africa.

By starting a home base support group, our work could expand, to bring hope and care to many more needy souls. The success of Crosscause is down to our dedicated & hard-working volunteers, and two ideals at the core of the initial ethos.

Our core ethos works around two simple but crucial ideals. Firstly that Crosscause would have a unique record of delivering 100% of the funds to the underprivileged. To achieve this, Crosscause is staffed by self-funding volunteers. Secondly, methods of informing donators of where their funds were spent are in place, giving all our supporters precise and transparent information on what their efforts have achieved.

IF YOU WANT TO KNOW MORE…

After the fall of the Romanian regime headed by Nicolae Ceausescu in 1990, the world opened its eyes to the horrors of the country’s institutions. One notorious orphanage, in a small village called Nicoresti, in the east of the country, received much media interest. This news coverage brought volunteers from around the world, who answered the call to relieve the plight of the neglected, unloved children. After many years of toiling against the authorities in the orphanage, a new path was chosen to bring joy to the children’s lives. Our volunteers, now working under the name Crosscause, bought a small house in the village for €6,500 and named it Casa Bridget which was speedily converted for our first four residents: Claudia, Alina, Nela, and Mihaela. A new day for the volunteers and for the girls had dawned.

Since then 27 souls have been liberated, Casa Bridget has expanded and each day up to 40 local kids in poor circumstances join us for schooling, a hot meal, and showering. Above all, what made the miracle happen and continue, is the burning desire in so many hearts to make their brothers and sisters feel safe and loved. To all the volunteers who came, built, carried, painted, loaded, drove an extended love, feel proud. In a small village in a faraway country, hearts beat because of you.

AND IF YOU WANT TO KNOW A LITTLE BIT MORE…

Immediately after the revolution of 1989 and the execution of Nicolae Ceauşescu, all the failings of the communist regime were highlighted. One of these major failings concerned the children. Ceauşescu, in the seventies, unexpectedly and without any social preparation abolished abortion. Many families, without having received any sex education and without knowing any contraceptive method (these were taboo during the communist regime) were left to cope with the birth of unwanted children. In many cases, they relied on homemade abortion methods. The consequences of these were disastrous: the birth of disabled children and a myriad of infants abandoned.

In this context arose “the spital” (orphanages) often hidden in the most remote parts of Romania (as Nicoresti) thus hiding the wounds of a regime that was no longer working. In these institutions, the lack of ethical values, the lack of qualified staff, and the lack of funds led to disastrous results. A lot of residents fled the institutions searching for refuge in the big cities (see the boys of sewers of Bucharest) and the ones most in need were kept in a state of abandonment and abuse in the spitals.

The Nicoresti Spital housed 150 abandoned children with various disabilities, grouped in huge rooms, often tied to beds with chains, completely abandoned in nauseating dirt, without any medical care, and often subjected to various types of violence. Despite improvements to the social care system and a huge amount of EU funding, there are still 100,000’s children living in institutions or in the foster care system.